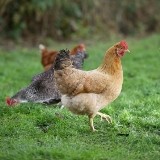 One of the things that we have been committed to experimenting with in the last few years is reduced tillage on our farm – in other words, fewer tractor passes through our fields and less turn-over of the soil. Among other things, we normally use tractors to cultivate out weeds, turn under our cover crops and make beds ready for planting after we have disked a field. There are two ways that we are thinking about reducing the use of tractors and soil turn-over.  One is using black poly mulch on our beds and the other is using our cover crops as mulch. The former has proven itself to have been an interim success, while the latter is our ultimate hope and long-term strategy.

The use of poly mulch on the surface of our beds started about three or four years ago, despite our immense dislike of plastic.  We trialed it in our early tomato plantings, and what we quickly realized was that the plastic cover significantly reduced our energy and water use.  Petroleum comes in many different forms, plastic is one, but diesel fuel is another.  Even after the first time we used the plastic, it was clear to us that we were seeing several big benefits with regard to energy, water and soil/plant health. 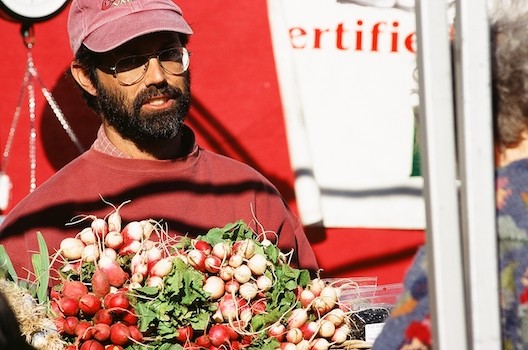 First, when the beds are covered with plastic, the weed pressure is next to nothing and we might end up doing one very light tractor cultivation on the sides of the beds in the furrows, rather than having to do multiple cultivations across the fields. This significantly reduces tractor traffic, but also reduces hand labor that we might otherwise need for weeding and hoeing.  In the past, in the early tomatoes, we needed to do a lot of hand weeding. We covered the early plants to protect them from frost.  When the beds are covered, it creates a great environment for the plants, but also for the weeds and when we uncovered the beds, there would be a bit of a jungle to deal with. Now that we are using black plastic mulch in the early tomatoes, we have the tomato plants growing through a hole in the plastic, and very little weed pressure. The labor savings is tremendous.

There’s a second reason that we have tempered our dislike of black plastic: We are seeing 25% to 30% reduction in water use. The mulch covers the bed and helps the soil to retain the moisture much longer – it is not being lost to the evaporation. Because of the drought conditions, we’ve been looking at ways to increase our already fairly proactive water efficiency practices, and we are really impressed by the water conservation from the plastic mulch.  We not only used it on summer crops last year, but also on some fall crops that were planted in late summer. The water conservation and the success of those crops was remarkable.  They may have been some of the most productive and best crops we’ve ever grown.

The third reason, and in many respects the most important reason that we came around was that we have found that the ground is incredibly friable under the black plastic. The biology dives deeper and all the critters and microorganisms are deeper in the soil, out of the heat and dry zone.  Now, we see activity all the way up to the top. With the  plastic mulch, moisture is retained in the bed all the way to the surface, so we see roots all the way to the surface of the soil. The effective biologically active rooting zone has increased, which means direct plant benefit from this soil improvement.

But plastic is still plastic, no matter what you call it. Unfortunately, the plastic is only used for one year, after which we pick it up out of the field and send it to be  recycled. We understand that there is a down side to using it, but we see it as a stepping stone to a more regenerative, cover-crop-based mulching system.

Our long-term experimental approach, an alternative to the plastic mulch, is to figure out how to use cover crops to mulch our beds and reduce or even eliminate our tillage. There are a couple of ways that we have been experimenting with this.  In one system, we chop the cover crops in place with a tractor implement that has knives on it that chops and drops the biomass in place, creating a coarse mulch. After the chopped up cover crop dies, it creates a dry mulch in place that we leave on the bed to smother out weeds.  We then plant our crop through the mulch using a coulter disk that slices open enough of the soil to sow seed or transplant small plants.

The other thing we’ve tried is to roll the cover crop down with a chevron-shaped crimper. This tool was developed by the Rodale Institute in Pennsylvania and has been on loan to us from U.C. Davis. This tool rolls down the full-standing, waist-high cover crop right in place and crimps the stems every 6 to 8 inches.  This kills the cover crop, leaving it lying on the ground as a heavy mulch. Again, we plant through the mulch and hope that weeds will be smothered by the cover crop covering the soil.

There are some big practical hurdles around weed and moisture management in the systems that we are experimenting with. Whenever we irrigate, some of the cover crop may regrow.  If the mulch is not totally effective, some weed seeds will germinate. And this year, because the beds are all so dry since there has been no spring rain, we aren’t sure how to get the optimal moisture window for planting.

We’re making this up as we go along. It is a grand experiment. We have a compass bearing, but don’t know exactly how to get there. The reason we are so interested, is that as farmers, our primary focus is on soil health. In that pursuit, we spend a lot of effort to build soil structure. Soil health is the net result of biologically dynamic, nutrient rich, intrinsically populated conditions. When we turn the soil over using tractors and tillage implements we are disturbing it, if not destroying the physical structure that has formed. We recognize that we have crucial biology in the soil and we are realizing that the tillage is counterproductive to establishing and maintaining underground habitat for the diverse community of microbes, fungi, arthropods and earthworms. In the final analysis, it is the health of that community that ultimately defines the health of our soil. 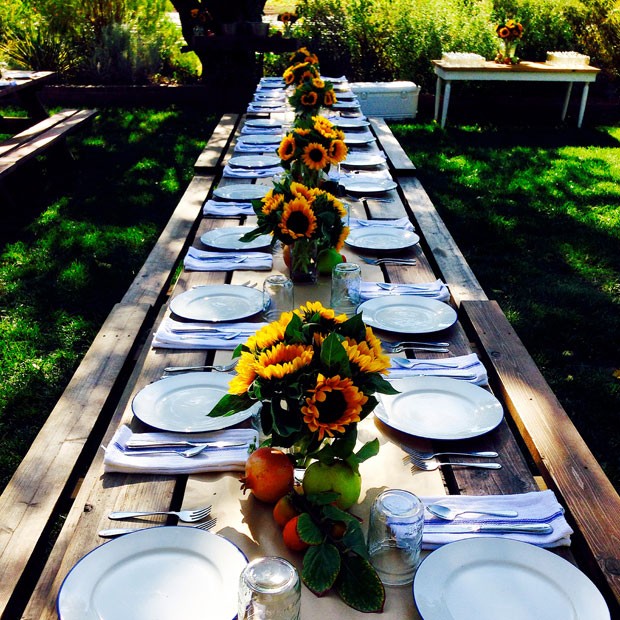 Our 2015 dinner dates are set! We would be honored if you could join us.

Our dinners feature seasonal items from our farm and the surrounding valley. There are still opening for the July 11th, August 8th and October 24th dinners.

For more information, or if you have any questions, please contact jenna@fullbellyfarm.com.

When I arrived at Full Belly back in the heat of July, the farm was well into its tomato season. As a wide-eyed city dweller with zero previous farm experience, coming on as an intern at the height of tomato season was a whirlwind introduction to how hard every person here works to create the beautiful produce that we see in our CSA boxes every week. My very first hours of work on the farm were spent harvesting Sun Gold cherry tomatoes. Several hours after that I was folding tomato boxes for packing and distribution. A few weeks later I was learning the names of forty plus varieties of heirloom and cherry tomatoes so I could help identify them for customers at the Marin farmer’s market. By the end of the summer, we were squeezing buckets worth of tomato seeds to be saved for the very plants that we now see in our fields!

Over the last few months, it has been incredible to watch those seeds become over 45,000 plants in our greenhouses.  And in the past week, we have steadily been transplanting ALL of those tomatoes in preparation for another summer season! Time flies when you’re having fun farming! One of the most delightful moments that we as interns have in our yearlong internship is witnessing the full circle of farm life, like these new tomato plants. Can’t wait for caprese salad again! 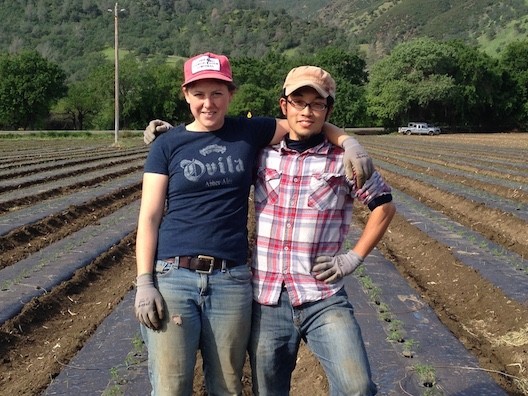 Two Full Belly interns, Ellen and Kaz, working in our young tomato field which they are covering as a protection from frosts and freezes.

My name is Ellen Knight, and I am one of four interns at the farm. I have been working here for almost nine months, and have truly been inspired by the incredible model that is Full Belly Farm.  The opportunities to learn are endless here, which makes every day dynamic and exciting. I have seen cover crops grow and then turned into the soil, beds prepared, plants seeded and transplanted. I’ve seen sheep, cows, and chickens as an integrated part of the farming system, moving around the farm eating up fields of cover crop or old crops, and fertilizing the soil in return. I’ve watched lambs and calves being born. I got to seed, weed, harvest, pack and load vegetables. While doing all these things, I’ve begun to learn Spanish from the incredible Full Belly crew.

Not only are they a model for sustainable agriculture here, but also for a sustainable life. As an intern, while I am feeding the chickens, milking the cow or weeding a row of chard, I am constantly contemplating farm life and how I am going to be successful with an operation of my own someday. What is most encouraging here is seeing the cooperation between the four farmers and their families. They work amazingly long hours, but they are doing it together and at the end of the day, they are all together to enjoy the fruits of their labor. Not only is there a diversity of crops here, but also a diversity of opinions and worldviews that I think has made Full Belly what it is today. That to me seems like the essence of a sustainable farm life, one that is shared and enjoyed by the community of friends and family around you.

Will you will be out of town over Spring break? Please let us know 5 days in advance if you will not need your CSA box. Thanks!

Special Note to our NHI members: The NHI, Emeryville site will be closed April 3rd. NO CSA box deliveries will be made that day.