Conservation Tillage and the Drought

Many conversations turn these days around the question — “how are you doing for water this year?” Water and California’s prolonged drought are subjects central to long term well- being for all who live in the Golden State. Seldom has attention been so clearly tuned to our intimate relationship with the cycles of climate and the vast system that delivers rainfall and snowpack to your tap. Drought becomes a moment for social focus and attention with the potential to re-think our relationship to resource use, when that resource seen previously as so abundant becomes constrained by scarcity.

We have built much of California’s abundance on the thinking that basic resources were unlimited. Oil and water are now mixed in the same fishbowl where abundance driven systems and design expectations are demonstrating real limits. From transportation systems, how we designed our cities, to the food systems that have evolved, patterns of consumption are based on a history of plenty and the expectation that the good of the moment and the need to keep an economic engine stoked to the maximum trumps long term thinking.

The notion that we will figure it out when we get there begs the question of conservation, responsible use and frugality.  We may now be there- with water being the essential resource that makes desserts bloom, moves our effluent, provides the pathway for salmon to spawn and proliferate, or grows our rice. The design that we have created is the construction of fewer people on a land rich in the ancient accumulation of fertility and water resources that seemed endless.

My own past is like that of many others who came to California‘s rich agricultural valleys to farm – a second generation immigrant family, where my mother’s parents and my father emigrated from Switzerland and came to this country, like so many poor from so many places, into a land rich in natural resources. The land was fertile and the water abundant, energy was cheaply exploited and enterprise largely unregulated. The plow or disc were the choices for tools – bare ground the annual ‘tabula rasa’, and good agricultural practices became the adherence to a common look: neat, single crop focus with little thought about long term soil vitality.

In the past number of years Full Belly has been working with and following a UC researcher, Jeff Mitchell, as he and a group of researchers and farmers have formed CASI – California Agricultural Systems Innovation. I will quote from a couple of their recent information pieces promoting their Conservation Tillage (CT) research:

“The “Case for CT” in California has gotten considerably stronger in recent years due to progress both from research as well as from farmer innovation. Today, peer-reviewed publications have documented the following clear benefits of CT in California:

In addition, very recent work now being prepared for publication, has shown that residues in CT systems can reduce about ½ inch of evaporation per week relative to bare ground, and that when highly efficient irrigation, such as overhead mechanized center pivot irrigation is used with CT, water savings on the order of 35 percent for wheat and also savings for corn compared to furrow irrigation can be achieved.

Mitchell and his colleagues are proponents of four tenants of conservation farming:

Maximize the diversity of plants, insects, fungi and microbiota;

Keep living roots in the soil;

[The] research plots that have been farmed continuously with conservation techniques have shown marked improvement in water conservation as well. “There’s more organic material going into the soil, more carbon and more nitrogen. There’s more capture of water, and the shade and residue reduces soil water evaporation” said Mitchell.

Soil health measurements have for many years focused on nutrient limitations and excesses. Yet long-term soil health measurements require consideration of the biological and physical characteristics of soil and the need to both identify and explicitly manage these characteristics. These biological components provide agro-ecosystem sustainability, resilience to climate variability – including drought or ability of soil to absorb excessive rainfall, healthy carbon sequestration and cycling, and ability to sustain high yields in agricultural production. Biological and physical soil characteristics stabilize plant nutrient availability and moderate nutrient loss.

The ability to adequately understand and measure the biological and physical components of a healthy soil will result in better overall nutrient and soil management practices – and may offer a new pathway in farming systems to make limited water go further. 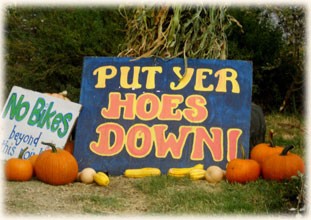 You are all invited to the Hoes Down Harvest Festival on October 4th and 5th, here at Full Belly Farm.  To some of you, that may seem too far in the future to plan for, but here at the farm, we are already thinking about it.  One part of the Festival that needs a lot of pre-planning, is the organization of our volunteers.  The Festival pretty-much runs on the good will and enthusiasm of 300 volunteers. Go to our web site for more information (www.hoesdown.org).  There’s a volunteer page there and a way to send in your request.  We will get back to you with details.

The Hoes Down is a celebration of the end of the harvest season. After the long summer, farmers and their friends all over northern California need to kick off their boots, kick up their heels, dance, and have a grand time with their family. The Hoes Down is a fundraiser for over 30 local and regional community organizations- not one penny stays on Full Belly Farm.

The post Hoes Down Is Coming! appeared first on Full Belly Farm.

One of the things I love most about summer is how simply yet sumptuously we eat without much time devoted to food preparation. In the winter time when it’s cool outside it’s fun to spend long hours over the stove, simmering and slow cooking and taking the time to really bring out flavors, but in the summer, it’s all about letting the freshness and coolness sing. Often all the produce needs is a squeeze of lemon juice or a dash of salt. Breakfast this morning was a toasted Acme baguette with fresh mozzarella and sliced New Girl tomatoes, with a bit of salt and basil. It couldn’t have tasted any better! Let me know if you ever need any ideas! 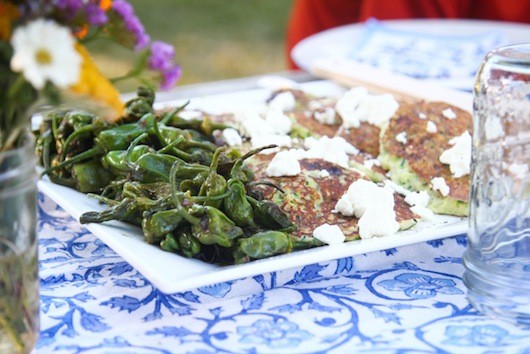 Amon and I love cooking for events in the summer. Above are pan fried padron peppers and zucchini fritters, below are goat cheese and Jimmy Nardello pepper croustinis. 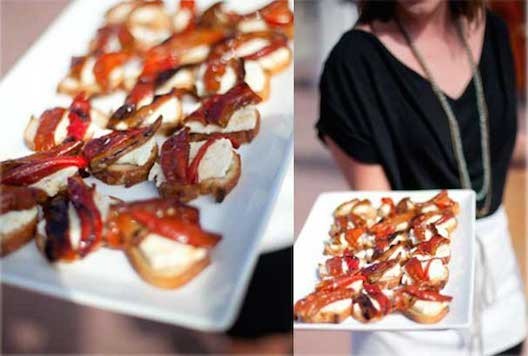 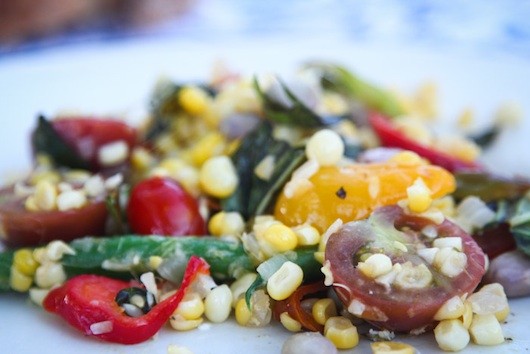 Above is a corn, tomato, green bean, and basil summer succotash. Below is my favorite afternoon snack, figs drizzled with balsamic vinegar and a dab of goat cheese. 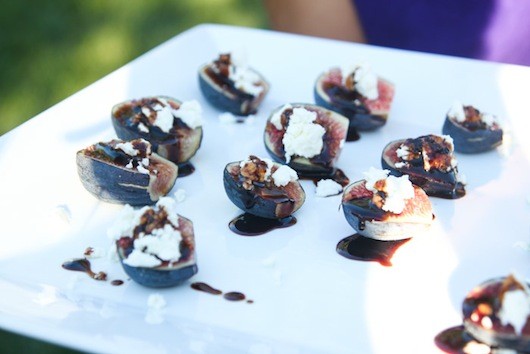 I hope you enjoy this summer’s flavors! 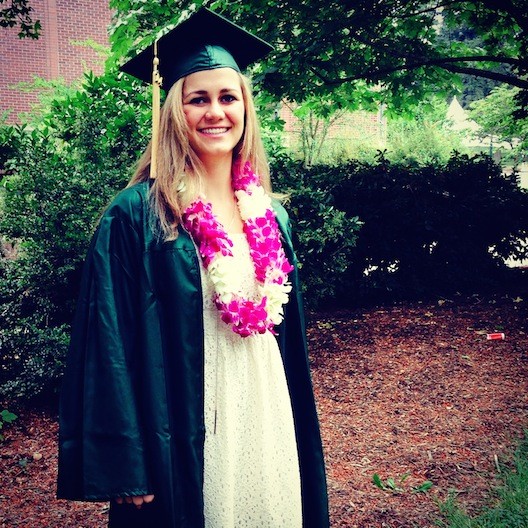 Congratulations to Full Belly farm kid Hannah Muller on her graduation from the University of Oregon with a degree in Sociology and a minor in Anthropology. Hannah has returned to the farm to become our head florist and begin her career as a floral designer! You can visit her beautiful blog –  blossombellyfarm.blogspot.com  to see her work!

Raising a Family on a Farm

There are several people more qualified than I to talk about raising kids on a farm, but I’ll offer my perspective as a (relatively) new mom. Whenever people find out that we live on a farm with a baby, their immediate reaction is “Wow! Your kid is so lucky! All that open space to run around!” This sentiment is completely true and one of the things I was most looking forward to before my baby was born, but it doesn’t begin to describe the full experience of having kids on a farm. The truth is, there are so many more blessings and challenges to raising kids on a farm than I ever imagined. Rowan is now 22 months old and has really come to love being a farm kid!

I love watching my child interact with our crew and pick up a little Spanish. I love that he is hearing another language on a regular basis. He is so eager to be able to communicate with them. Sometimes in the afternoons we go out and help the flower crew and he will start to spout off all the Spanish words that he knows. “Buenos Dias!” “Caballo!” “Gracias!” He knows that Catalina is always good for a piece of fruit and Isobel keeps crackers and cookies up on the shelf. He has learned many of the crew member’s names, and knows which trucks they drive. He was lucky enough to be offered a ride on the farm’s biggest and newest tractor by Pancho last week, and I think it was the highlight of his year. Our crew has watched many farm children grow up, and I relish watching him delight in the crew and the crew delight in him. It is really fun to see him making so many new friends.

Speaking of tractors (and trucks and forklifts, etc.), they are one of my biggest fears. Full Belly Farm is a really busy place, and now that my child is so mobile, I sometimes feel like I have to watch him like a hawk to make sure he doesn’t run out into the yard or driveway unsupervised. With 80+ people buzzing around, the farm can be a scary place for a mom. My husband recalls falling off of the back of a truck when he was little. Although he seems to remember this fondly for some reason, I was like, “Are you KIDDING ME?” So terrifying!

Summertime is also a time of long hours and little rest. There are days when I or his dad leave the house long before he wakes up in the morning, and that is no fun. The good news is that I have one of the few jobs where my child gets to spend his day where I work, and I pop over to visit him often. I feel really lucky to be able to have him close by. I know he feels really lucky to be so close by during the day not only to me and my husband but also to his Tata Hallie, his Nana Dru, his Pop- Pop Paul, his uncle Rye Rye and his Tata Hannah. They are always teaching him fun things and letting him tag along for projects. He loves each of them dearly and looks forward to seeing them each day.

We are already starting to worry about what to do for school. The nearest public school is a half hour away, and should we decide that public school is not for us, the only other option we have at this point is homeschooling, which to be honest, I’m not sure I would be much good at. Like so many other things in the country, if it’s not easily available you just have to make it work yourself. We are talking with other parents in our rural area about starting a small program to give ourselves an alternative.

Last but not least is the food aspect of living on this farm. My child can identify kale, kohlrabi, beets, radishes, carrots, broccoli, figs, apricots, peaches, etc., etc., etc. Being able to go out and pick a snack off the tree is just awesome. No other way to say it. Sure, he gets the occasional smoothie or treat when we go to town, but for the most part he eats farm food and he loves it. As a parent it is so nice to know that what goes into his growing body is nourishing him.

So that is the short version of some of the pros and cons to raising a child on a farm – a mixed bag, like most things in life. Overall though, I wouldn’t trade all the space for exploring, good food, time near family and learning opportunities on a farm for anything. Farm living is not for everyone, but it pretty clearly is for us. 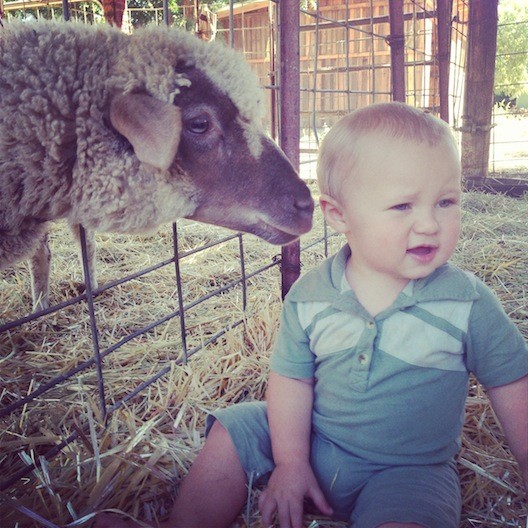 Rowan had mixed feelings about sheep early on (he loves them now!). He has never had that problem with tractors! 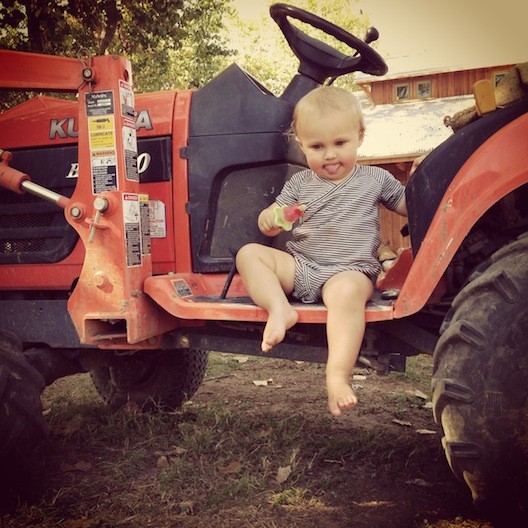