Farmers all over California are weighing their summer water options.  Some, for example, on the west side of the San Joaquin Valley, will fallow all of their land for lack of water.  Others (like Full Belly) have access to groundwater, and will irrigate only higher value crops, and choose to grow less in certain fields or reduce water use later in the season.

In declaring a drought emergency, Governor Brown called out the likely connection between the drought and climate change.  I recently asked a friend if the farmers in his neighborhood talked about the drought in those terms and he replied that while they may or may not think about the impact of climate change, what they worry about more is the impact of regulations that will be imposed on agriculture in the name of addressing climate change!

This is a sorry state of affairs. Farmers probably think a lot more about the weather than most people.  We are especially vulnerable to changes in weather patterns and regularly see how effective the weather can be at wrecking even the most carefully made plans. On the other hand, we also have a lot of experience working with the elements and figuring out solutions.

With all of this in mind, a group of us has been proposing for years that climate change policymakers should take note of the potential of agriculture to be a big part of the solution.  It hasn’t been easy, but now there is a possibility that we may secure a small portion of cap-and-trade funds for agriculture, hopefully in a way that will set those fears about the regulatory world at rest (albeit temporarily!),

Governor Brown and the state legislature are currently deciding the future of investments to address climate change and avoid its worst impacts. The Governor’s budget proposal for 2014-15 includes funding for sustainable agriculture and farmland conservation. While the bulk of the allocations in the proposal are for high-speed rail, clean transportation and energy efficiency, some funds will also go towards farmland preservation and agricultural management strategies that reduce greenhouse gas emissions, cut energy and water use and produce on-farm renewable energy.

Next, the legislature weighs in. They must pass a budget by mid-June, and of course there are competing ideas about how to spend cap-and-trade proceeds, proposals that change daily and some of which don’t include investments in agriculture.

Although public awareness of food and farming issues is at an all-time high, public investment into agricultural research, technical assistance and education is at an all-time low.  If our proposals to invest in climate-friendly agriculture fly, it will be a modest first step towards reinvesting in California’s 25 million acres of land devoted to farming and ranching.

The coalition of groups working on these proposals is California Agriculture Climate Action Network (CalCAN).  We are asking friends of sustainable agriculture to show support for climate-friendly farming by calling their California Senators and Assembly-members, urging them to include cap-and-trade investments into sustainable agriculture in the state budget. It only takes a few minutes. You can find your representative’s phone number here: http://findyourrep.legislature.ca.gov/. You can find talking points here: http://calclimateag.org/take-action/.

With luck and a little help from our friends, we could see some programs come out of this that will increase farm productivity and income, make agriculture more resilient to variations in climate, and help farmers become a big part of the solution to the climate change challenge!

Cache Creek – usually waist deep this time of year – is shallow and clear. 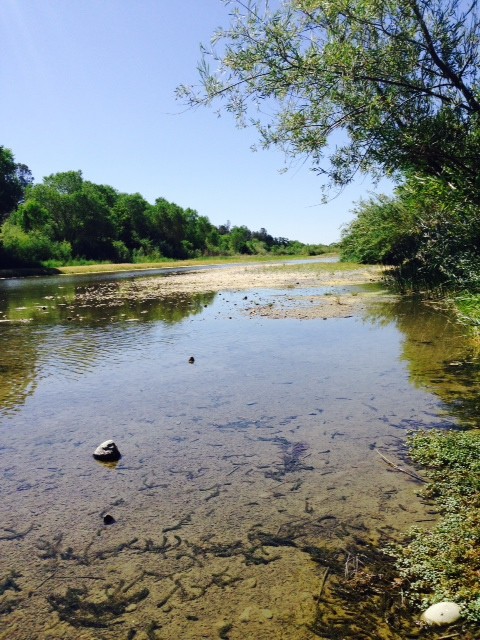 I woke up this morning with a bee in my bonnet.  What I mean is, I have a lot of ‘must do today items’ on my brain.  It is that time of year, when I spend my dream sleep thinking about loose ends.  This begins to describe the tempo of May, as I pen this note on a torn page of loose leaf paper while simultaneously trying to coordinate more than a couple dozen concurrent activities.  As I write, the farm moves, or should I say swirls, about me, moving in divergent directions at a pace that demands one to ‘walk fast and look nervous.‘   It is not out of fear that we appear frantic or nervous but out of demand.  Nature has set the pace.

The most wondrous part of farming for me is that at certain times of the year the farm takes on a life entirely of its own.  It is in those times when it is no longer one’s creation but a teeming, feeding, breeding organism that lives independent of its stewards, at times leaving them in its wake.  At this time we merely try to keep it afloat and within bounds.   Or maybe we are just hanging on and enjoying the ride.  This week feels like a little bit of both.

With a lack of eloquence or word smithing, my May mornings begin with concise, abbreviated lists to outline needs and priorities for the day’s supervision.  Here is an excerpt from today’s list:

This is only my list – Paul, Dru, Amon, Jenna, Hallie, Janine, Pancho and all the crew leaders have lists and priorities of their own. (Did I mention flowers? Alas, this May’s number one crop may be finally slowing down a wee bit).  The fabulous part of successful group effort is the beauty of synchronicity and the deep satisfaction of forward movement.  The month of May leaves little time for contemplation as we are in the ‘thick of it.’ But, with the buzz of incessant activity, we ready ourselves for the real work and bounty of summer that lies ahead.  Enjoy all your meals! Join us for an Open Farm Day on Saturday, June 13. Family and friends are welcome – there is no charge. A formal tour will begin at 11am, but you are welcome to come any time and splash in the creek, bring your own picnic, and spend the day here at the farm! A farmstand will be set up with produce, t-shirts, and more. Please bring a water bottle, hat, and lots of sunscreen. Questions? Please email hallie@fullbellyfarm.com.

This chef’s secret can be yours too!